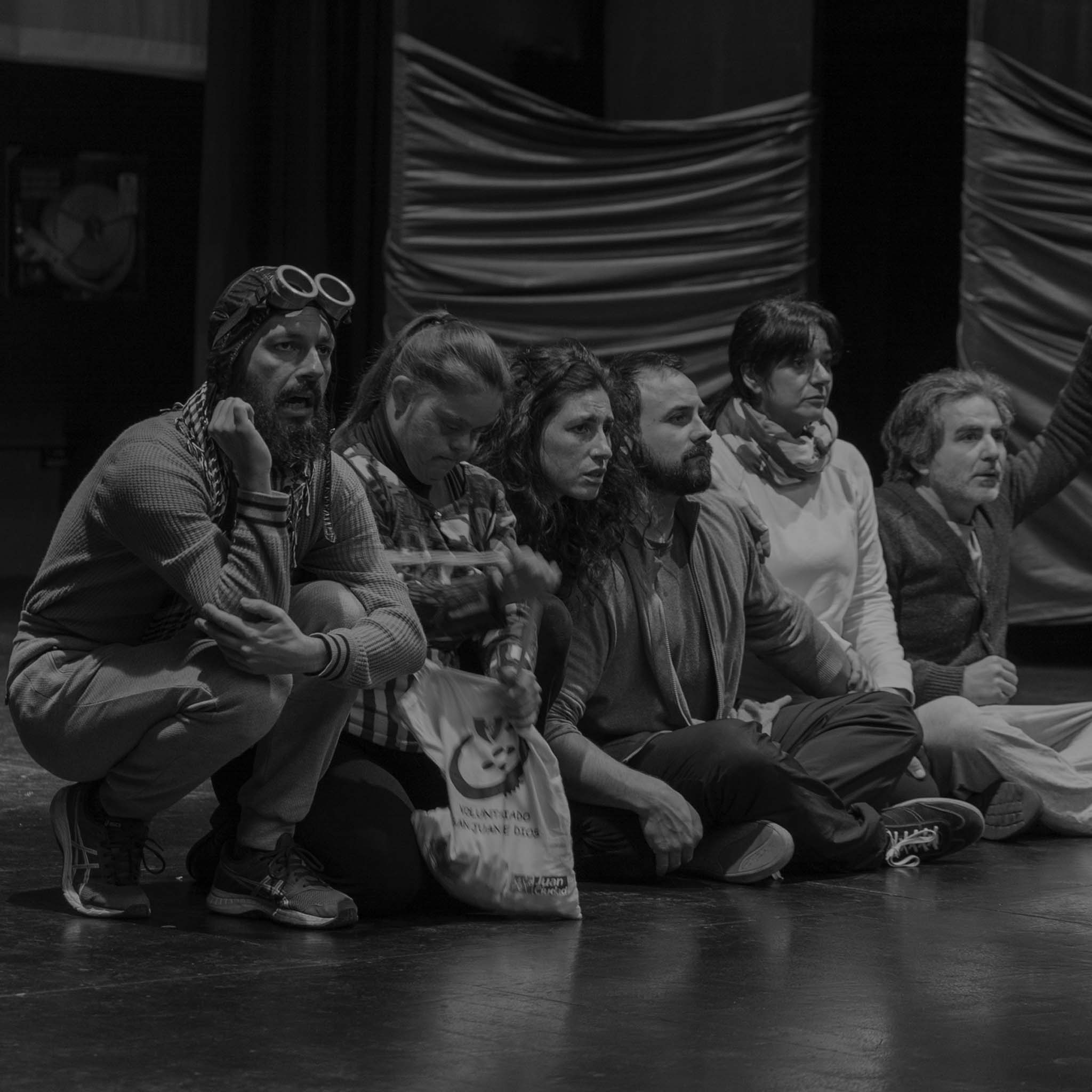 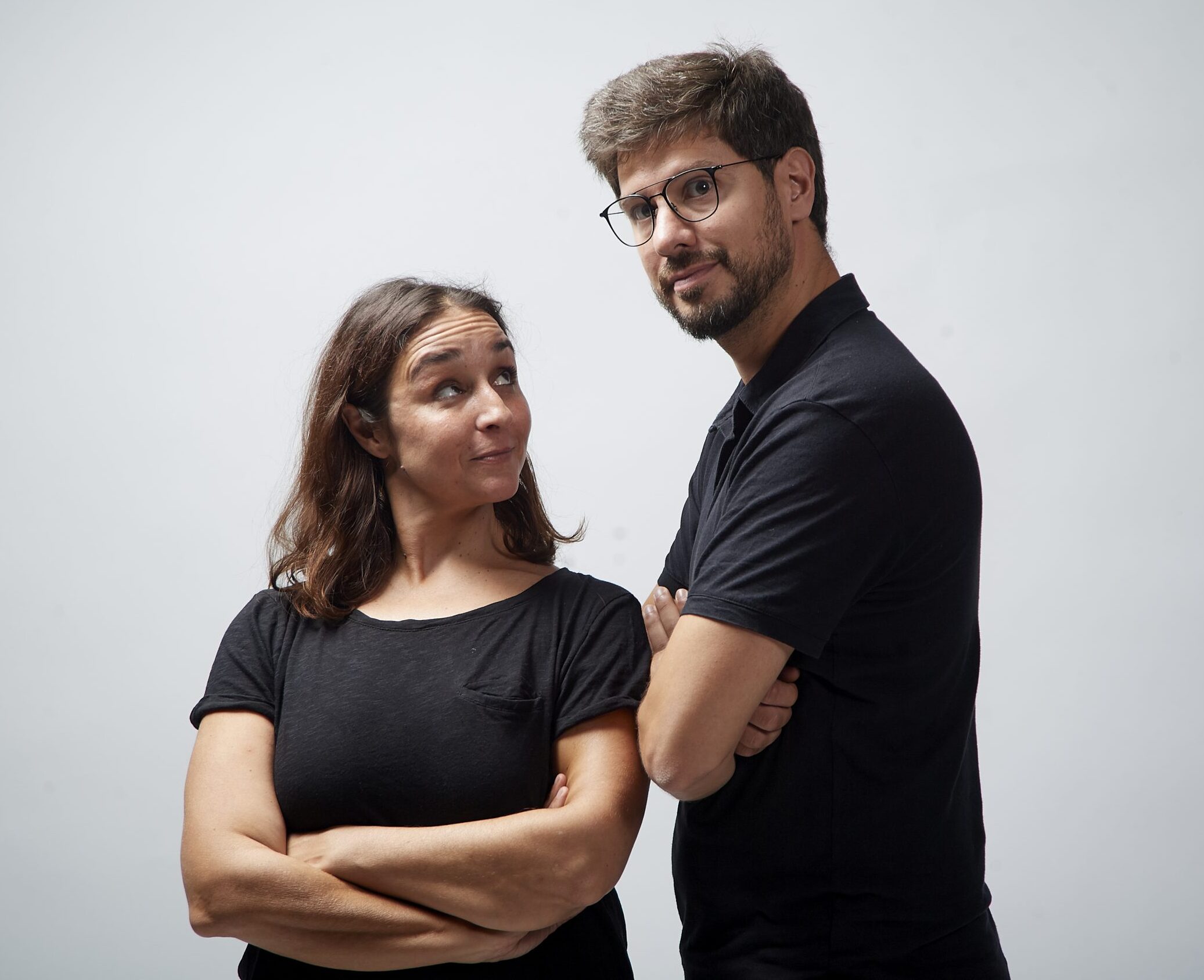 We travelled to Paris, and joined the École International Phillippe Gaulier, in search of change and artistic growth. After two years, we developed a new artistic perspective. We discovered the beauty and magic that hides behind the actors’ masks; the power to reach the essence of acting, as well as the need of creators and actors to assume risks and dive into the unknown.

Upon returning from Paris, apart from working with other companies, we felt a greater need to explore this artistic perspective through the essence of playing and its mighty vulnerability.

Cía Deconné is born of this need.

After graduating in the School of Performing Arts of Murcia (ESAD Escuela de Arte Dramático de Murcia), Pepe Galera completed an Official Masters in Dance and Artistic Movement. He would then enrol in Le École International Philippe Gaulier in Paris.

When he returns to Murcia he starts working as an actor and stage manager in different local companies. Whilst growing professionally in theatre, Pepe Galera started his career in the field of applying performing arts to social inclusion in different associations that support mentally impaired people (cerebral palsy, intellectual and functional diversity…).

He would continue to work along this line in a non-government association for homeless, organising theatre workshops aiming at developing their social skills and emotional rehabilitation. In this association he creates the theatre company MÁS, with homeless and professional actors. Its objective is to join at once social awareness with performing arts. As a result, Pepe Galera created and directed Postales para un Niño (Postcard for a Child), a play endorsed by the Commission of Inclusive Theatre of the Network of National theatres.

As a pedagogist, Pepe Galera participates in the Erasmus + project that promotes education and performing arts among young people; he works with associations and +65 women centres; he runs courses on overcoming inhibition and developing social skills for gifted pupils, and theatre seminars in high schools and the Catholic University of Murcia. He also runs courses for professional actors and cooperates with the School of Performing Arts of Murcia (ESAD Escuela de Arte Dramático de Murcia) as an assistant director of graduating students.

As actor and creator, Pepe Galera won twice the Creajoven Award of the Region of Murcia, first with Platos Rotos (Shattered Plates) and then the first creation by Cía Deconne, the buffoon-play Greetings from the Swamps, directed by Rocío Bernal.

He would show her the way to a wide range of theatrical languages stemming from Le École International Philippe Gaulier in Paris.

As a result of on-going training throughout several years with remarkable teachers such as Antón Valén and Norman Taylor, Rocío Bernal discovers what she considers is theatre in its full dimension and how she understands the journey from physicality, from what is small and mundane, towards the magic of theatre beyond the words.

Rocío Bernal has worked with different companies from Murcia during her 20- year professional career, out of which we ought to highlight 10 years as part of Nacho Vilar Productions. In this period, she took part in three street theatre productions under the direction of Antón Valén, that were performed nationally and internationally for years.

As director and playwright, Rocío Bernal cooperates with Pepe Galera in the theatre Company MAS, a company of inclusive theatre for homeless and professional actors, where they create Postales para un niño (Postcards for a Child). This play will receive the I Luchana Theatres award, and the Social Theatre Recognition in the Azahar Performing Arts awards of the Region of Murcia in 2018.

In 2019 Rocío Bernal received the Azahar Award for the Best Supporting Actress for her role in Henry IV by Teatro de la Entrega.

You can find out more about which cookies we are using or switch them off in settings.

This website uses cookies so that we can provide you with the best user experience possible. Cookie information is stored in your browser and performs functions such as recognising you when you return to our website and helping our team to understand which sections of the website you find most interesting and useful.

Strictly Necessary Cookie should be enabled at all times so that we can save your preferences for cookie settings.

If you disable this cookie, we will not be able to save your preferences. This means that every time you visit this website you will need to enable or disable cookies again.

This website uses Google Analytics to collect anonymous information such as the number of visitors to the site, and the most popular pages.

Please enable Strictly Necessary Cookies first so that we can save your preferences!